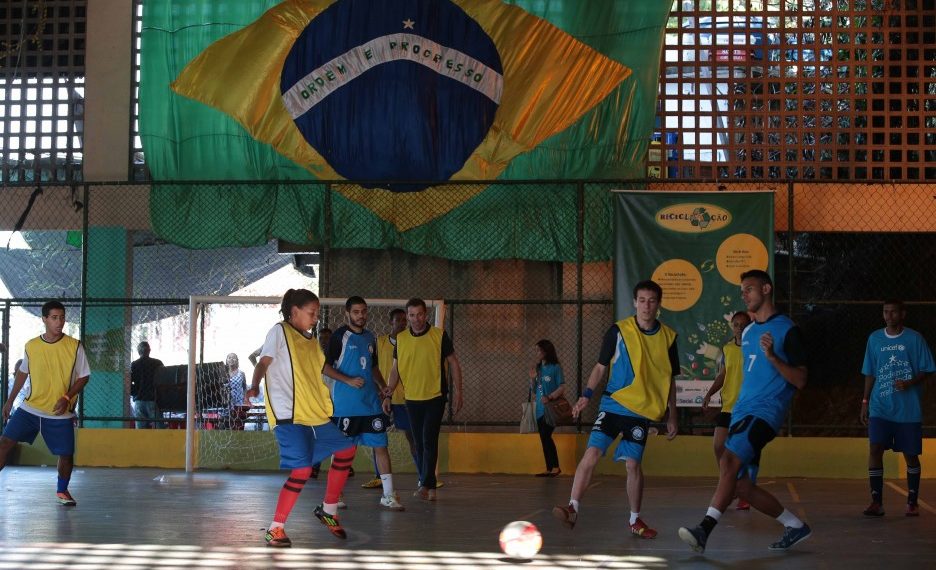 ‘It’s in your hands to protect’, the joint campaign launched with UNICEF during the 2014 FIFA World Cup™, continued in 2015 and 2016 in preparation for and during the Rio 2016 Olympic Games to encourage people to report violence against children during major sporting events.

A toll-free helpline, which operated 24 hours a day, 7 days a week, was created to receive reports of human rights violations and maintained by the National Ombudsman for Human Rights of Brazil.

Awareness messages were distributed by hotels, bars, taxis, buses, airports, airlines in the lead up to the Games, as well as through print media, billboards and social media. Targeted outreach work was conducted to raise awareness on child protection issues, especially sexual exploitation in the context of major sporting events. Groups of experienced social workers approached tourists and locals engaged with the Games to spread child protection messages.

In August 2016, a new promotional video, “Your hands can change stories”, was launched to encourage people to download the UNICEF app Proteja Brasil (Protect Brazil), which was developed to encourage engagement of the general public in the protection of children and adolescents in Brazil.

The campaign used sport as a tool to:

The campaign was successful in reaching the following stakeholders:

10,714 calls to child protection institutions were made to local authorities as a result of the campaign that was designed to inform and engage local and foreign tourists during the FIFA World Cup and the Rio 2016 Olympic and Paralympic Games into reporting and preventing cases of violence against children to effectively activate the established child protection mechanisms.

An updated version of the Protect Brazil app was made available to 30.000 volunteers to the Olympic and Paralympic Games, who also received training. In an effort to further promote the use of the App during the Games, Save the Dream partnered the organisation of a friendly football match between international football legends, such as Brazil’s World Cup-winning captain Cafu, Zico, Trezeguet, Karembeu, Dunga, Petkovic, Felipe, Assuncao, Lucio, E Marcelo Travares and some talented and brave street children from the local Caracol Favela in Rio. Following the event, a film showing children from the favelas in Rio receiving the chance to play against the football legends went viral on social media with over 7 million views. A stand of Save the Dream was built at Bayt Qatar to promote the App and visited by 16,000 people during the course of the Games.

In support of the activities implemented in Brazil, UNICEF, in partnership with Save the Dream, launched the online platform Team UNICEF – Get Active for Children, which combined physical activity and mobile technology, with the ultimate aim of protecting Brazilian boys and girls.

From 28 July to 18 September 2016, 33,354 people from 153 countries around the world ran and walked for children with Team UNICEF. Over 10 million people were reached, 450 thousand people engaged. The number of participants was three times higher than the target. Upon conclusion, the initiative had highly satisfied participants who rated the experience 9.2 out of 10.