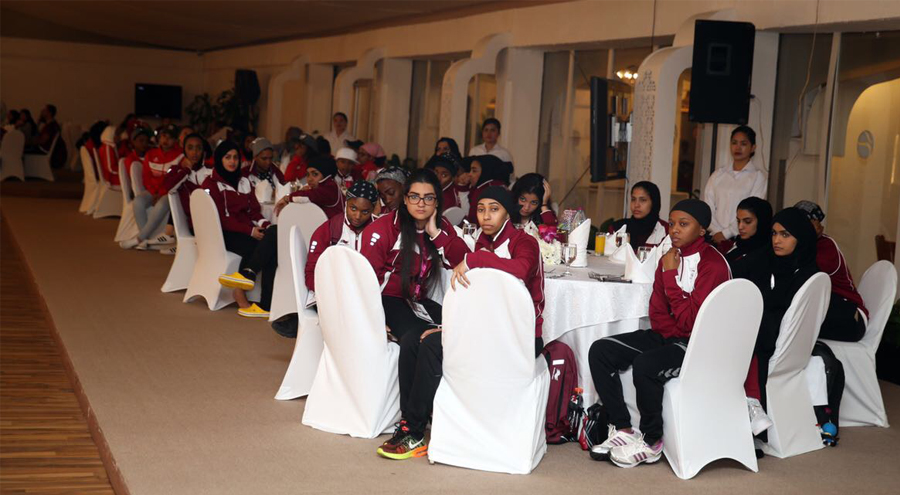 Female athletes and high-level representatives unite to share experiences and highlight the positive values of sport in society.

At special ceremony to celebrate the ongoing GCC Women’s Games, Save the Dream – the global movement established by the International Centre for Sport Security (ICSS) in partnership with the Qatar Olympic Committee – highlighted the powerful role that sport plays in educating and empowering women and young girls around the world.

Hosted just a few days after International Women’s Day, Save the Dream and female athletes from across the Middle East united at a special ceremony to share their personal experiences about the inspiring and powerful role sport can play in empowering women from all cultures and communities, as well as the role it has in cultivating creativity and innovation in society.

As part of the ceremony, several athletes and high-level representatives from across the Middle East shared their experiences of how sport can teach positive values, as well as the important role sports programmes and initiatives can play in empowering and benefiting women and young girls around the world.

“On behalf of Save the Dream, I would like to thank the Qatar Women’s Sport Committee and its President Lolwa H. Al-Marri for its support to Save the Dream and giving us the opportunity to present our work to female athletes from across the GCC.

“As we continue to develop as a global movement, Save the Dream encourages female athletes competing in the GCC Women’s Games to share the positive impact sport can make in society and the role sport can have in inspiring both young girls and boys through their passion and commitment to sport and its values.

“The GCC Women’s Games provides a unique opportunity to Save the Dream to connect with leading female athletes and representatives from across the GCC and expand our activities and ambassador programme, which already involves leading athletes including Penny Heyns, Honey Thalijeh, Giusy Versace and Rosa Mota.”

Speaking on the panel, former volleyball athlete and specialist at Save the Dream, Haya Al Ahmad, said:

“Sport provides an incredible platform to empower women and young girls of all ages. It can inspire, provide new opportunities and experiences to grow and develop, as well as offering a unique avenue for women to express their individuality and creativity.

“As a former athlete, I am passionate about highlighting the importance of empowering and educating women of all ages across the Middle East and beyond about the benefits of sport, as well as the vital role it plays in society.

“By breaking down barriers, embracing our culture and traditions as well as encouraging more women and communities to play sport through programmes like Save the Dream, I believe that Arab women can achieve at the very highest level and fulfil their potential by harnessing the power of sport.”

Several examples of how Save the Dream empowers women and young girls through sport were highlighted during the session, including the ‘Delhi Dreams’ programme developed with Save the Dream and Aston Villa Football Club, the ongoing TASEM project training athletes from MENA countries to become sport event managers and the upcoming Save the Dream Symposium.

Hosted during the 14th International Society of Sport Psychology (ISSP) World Congress in July 2017 the Save the Dream participation at the ISSP World Congress will aim share outstanding examples of how female athletes overcome obstacles to make their dreams come true.

During the closing remarks, Siham Alawami, Director of Special Projects – Save the Dream told her story when she was an athlete competing in Freestyle Skiing in Austria. She said to the young female athletes ‘You are all very lucky and privileged to have the opportunity to be an athlete and have the support of your countries and federations. There are millions of young people who dream to be an athlete. When I was your age, I went to the US and worked as private secretary for the Heavy Weight Boxing Champion Mohammad Ali, at that time I decided to be a role model and to do great things like him. Later I studied and competed in Freestyle Skiing until I became third best in Ski Ballet, I worked at the same time and studied in the evening. Injuries did not prevent me from standing again and compete.

Siham concluded ‘I want you to be the role model. I want to see names like Maryam, Aisha and Fatima as role models doing great things for the local society. I want every athlete is to be a role model and to contribute to the society. We need the local role model to spread the sport values and set an example.’

Held under the patronage of HE Sheikha Hind bint Hamad Al-Thani, Vice Chairperson and CEO of Qatar Foundation for Education, Science and Community Development, the 5th edition of the GCC Women’s Games takes place in Doha, Qatar between 7-17 March 2017, bringing together over 891 athletes from four Gulf countries across 10 sports.