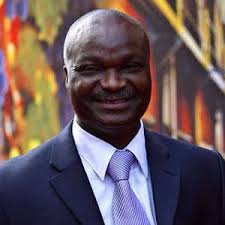 Roger Milla is a Cameroonian former professional footballer who played as a forward. He was one of the first African players to be major stars on the international stage. He played in three World Cups for the Cameroon national team. He helped Cameroon become the first African team to reach the World Cup quarter-finals. In 2004 he was named by Pelé in the FIFA 100 list of the world’s greatest living players. In 2007, the Confederation of African Football named Milla the best African player of the previous 50 years.