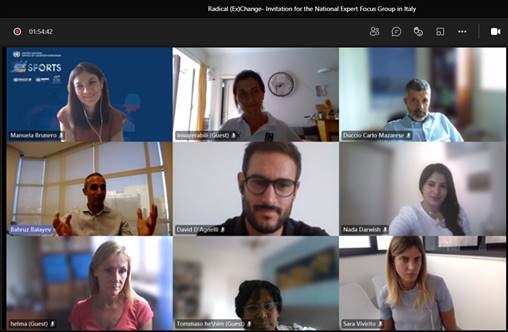 Within the framework of Save the Dream’s project “Network for the Exchange of Good Practices on the Integration of Youngsters at Risk of Radicalisation through Sports” dubbed as Radical (Ex)Change – which is funded by the EU’s Directorate-General for Education and Culture, and jointly designed with the International Olympic Truce Centre (IOTC) as the project lead, involving other international partners such as the University of the Balearic Islands (UIB) and European Multisport Club Association (EMCA), earlier this month, Save the Dream organised a series of national expert focus groups starting with meetings in the UK and Italy which will be followed by additional events in Spain, Belgium, and Greece in the coming weeks.

The national expert focus group meetings will gather over 60 experts including representatives from the United Nations Office of Counter-Terrorism (UNOCT) and United Nations Interregional Crime and Justice Research Institute (UNICRI), as well as other regional and local organizations, grassroots associations, NGOs, counselling boards, municipalities, academic institutions, and experts in the prevention of marginalisation and radicalisation through sport.

The meetings also encouraged participation of youth groups in order to gain exposure to different perspectives and opportunities that contribute to information gathering related to good practices and experiences concerning the use of sport as a tool for social inclusion of people at risk.

Dr. Bahruz Balayev, Head of Global Outreach at Save the Dream explained that the establishment of a network of experts working in the field of social inclusion of youth at risk and professionals engaged in the use of sport as a tool for peace and development, is an important step in the efforts toward preventing marginalisation and radicalization of youth in Europe. “The meetings we held this month with experts from the UK and Italy have revealed that there is a need for exhaustive research and multidisciplinary engagement in this area which we plan to implement through the main outputs of the Radical (Ex)Change project,” he said.